Parmigiano-Reggiano is a cheese known the world over. I can always remember having it to grate over pasta when I was growing up and I always have it in my own house now. It’s as common a household staple as peanut butter. So I must admit that I was shocked to learn that a cheese commonly found in grocery stores back home in the United States is still made by hand.

I’d long been curious about visiting a Parmigiano-Reggiano factory. I’d seen pictures of the giant wheels of cheese stacked floor to ceiling while they aged in a warehouse. I’ve even seen the production of mozzarella di bufala on small farms in Campania where multiple workers complete the various steps. I guess I had more of an assembly line scene in my mind.

Imagine my surprise to arrive at a Parmigiano-Reggiano factory just as the sun was rising and find just one cheese master and his wife making the day’s quota of cheese. Surely the other workers just hadn’t arrived yet.

But no one else ever did arrive.

Parmigiano-Reggiano D.O.P has been made for over 900 years using the same “recipe” and techniques handed down from the monks who originally invented it. Since Italy’s king of cheese is a designated product of origin (D.O.P), it must be produced in a very specific way that even starts with what the cows eat. 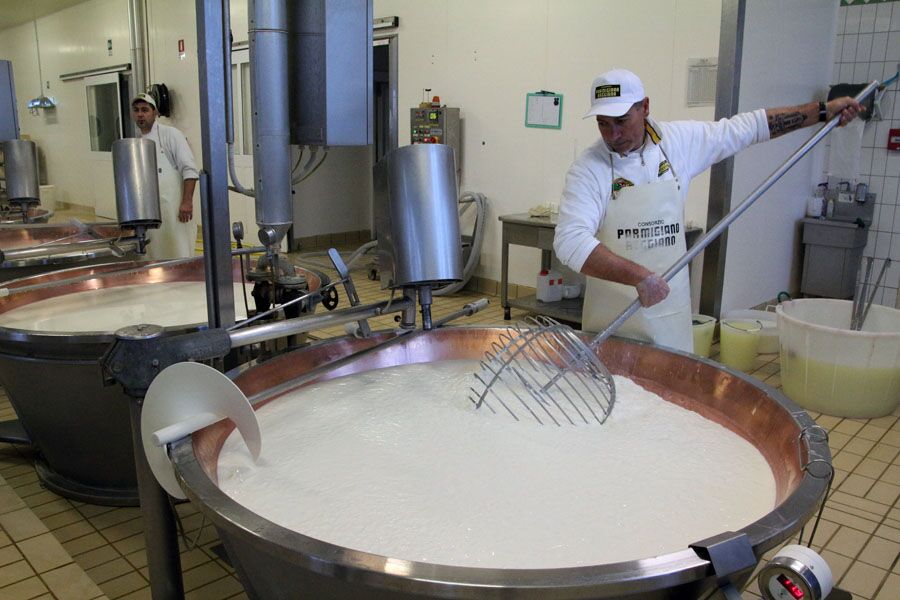 An ancient breed of red cow is used and they are milked successively. The first milking happens the evening before and the milk is skimmed and stored overnight. The morning milking is the whole milk, which is added to the previous night’s skim milk making a mixture of 50% skim and 50% whole milk.

The cows had already been milked when I arrived, but I watched as the milk was put into large vats and the cheesemaker added a bit of whey to each vat. It takes 291 gallons of milk to make two wheels of cheese.

The milk and whey are mixed while heated to produce cheese curds. As the milk heats, the cheese master uses a big copper whisk like instrument called a spino to cut the cheese up in to curds. 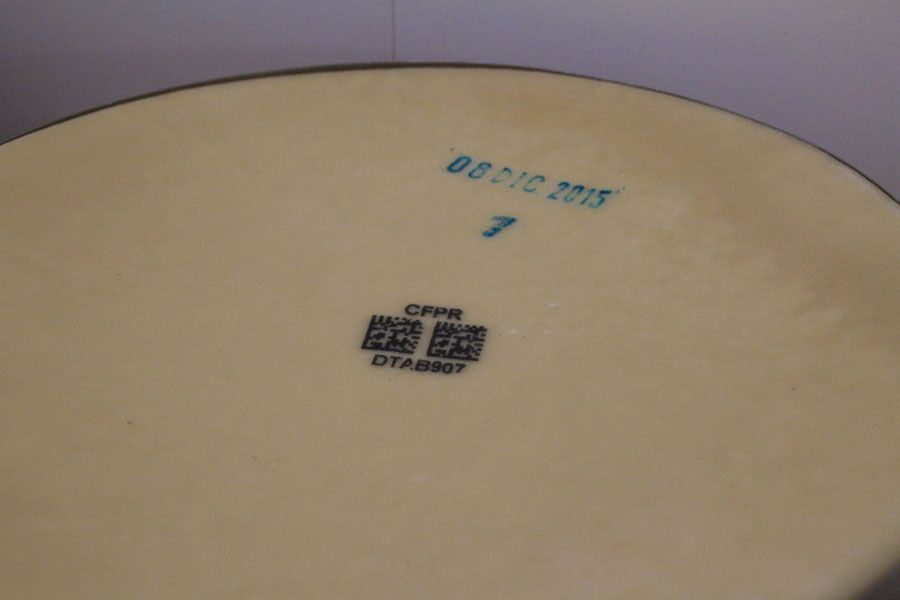 It takes about an hour for the cheese curds to settle in to a mass at the bottom of the deep vats. Butter is made from the leftover cream that separates from the curds so that there isn’t any waste. The big masses from each vat are cut in half and the two pieces, called twins, are the two wheels of cheese produced from the vat. 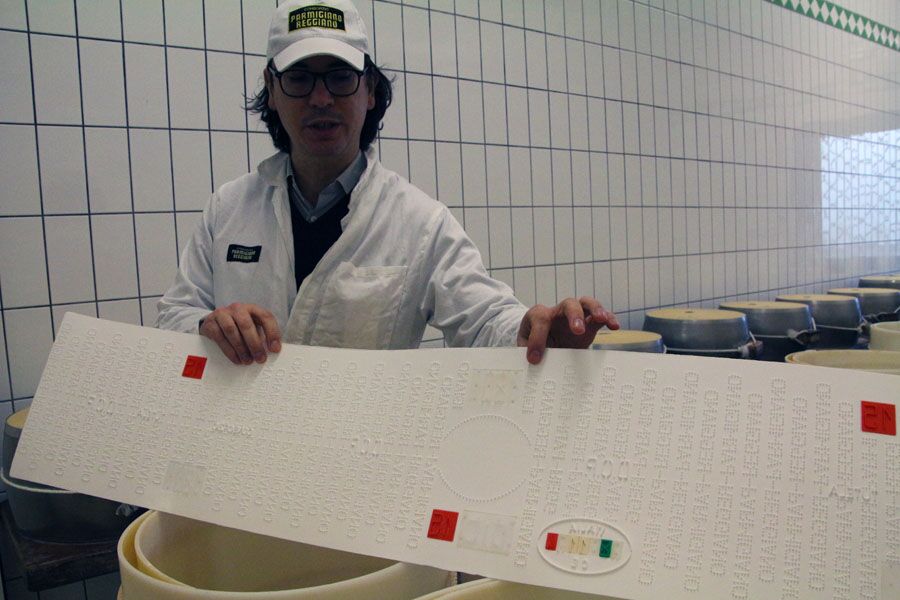 But they aren’t Parmigiano-Reggiano D.O.P just yet. First each cheese wheel is put into a mold and imprinted with information like the month, year, cheese producer code, health inspector code and the words Parmigiano-Reggiano. A barcode, another date stamp and the number of the vat that the cheese was made in are all stamped on the cheese. It is then left to sit in the mold for 2-3 days while it dries and cools. 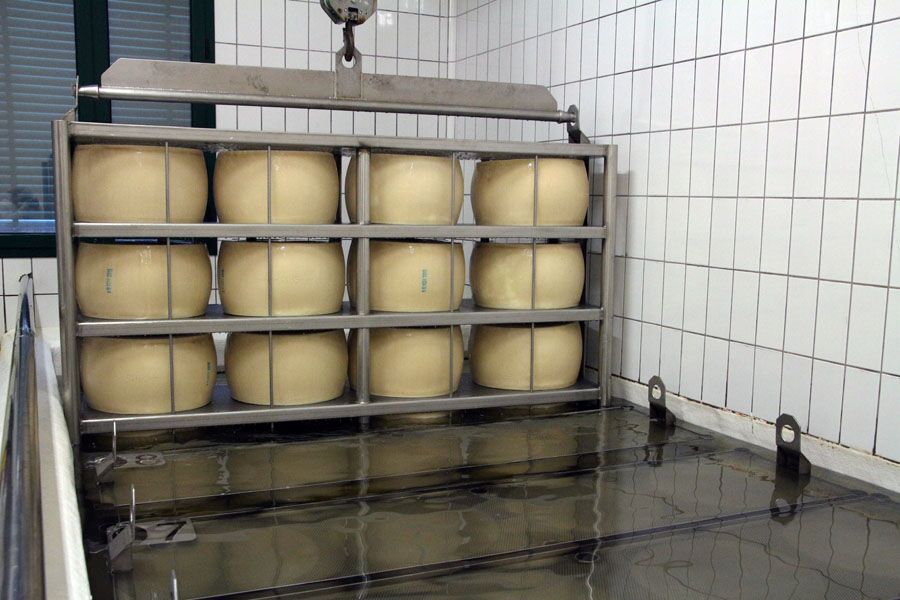 It takes about one year of aging before the cheese master can determine if the cheese meets the quality standards to age to a Parmigiano-Reggiano D.O.P. An inspector comes and checks quality by using a hammer to test for certain sounds that his finely trained ear can hear and vibrations his hand can feel. If the cheese meets his standards, he will give it an additional stamp signifying it is officially a Parmigiano-Reggiano D.O.P.

The cheeses that don’t meet the standards get a different stamp signifying they didn’t pass the quality controls. These cheeses will have all their markings removed and be sold as hard grated cheeses usually to companies. 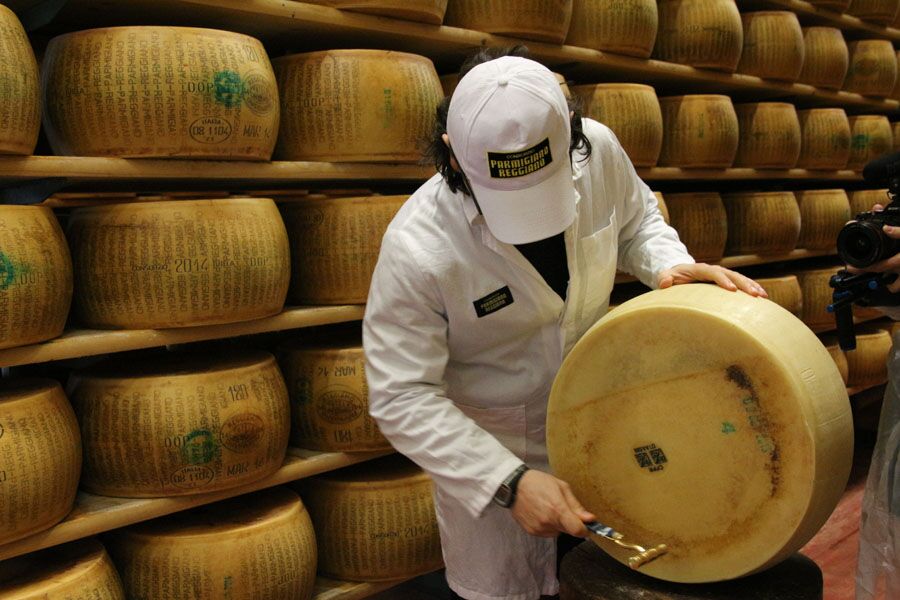 If there’s any doubt during the quality checks, the cheese master is authorized to cut 1 in every 1000 cheeses to check the inside. 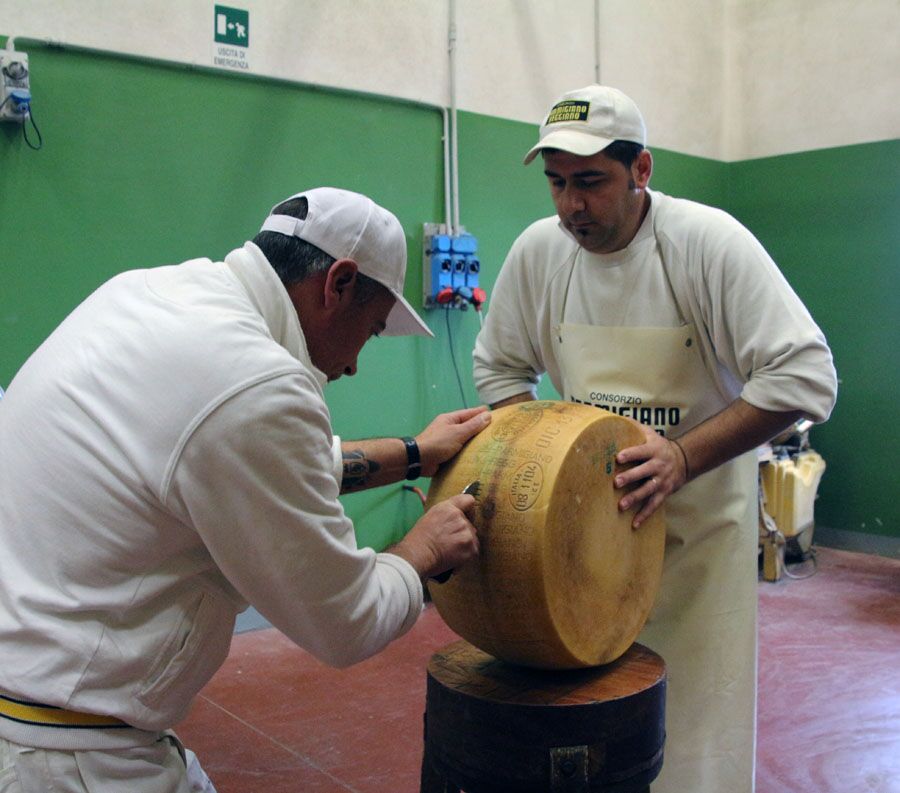 Watching the process from beginning to end is fascinating, but the best part of touring a Parmigiano-Reggiano is tasting some! I not only tried a variety aged to 15, 24 and 30 months but I was lucky to have the cheese master open a fresh one that had just aged to 24 months. 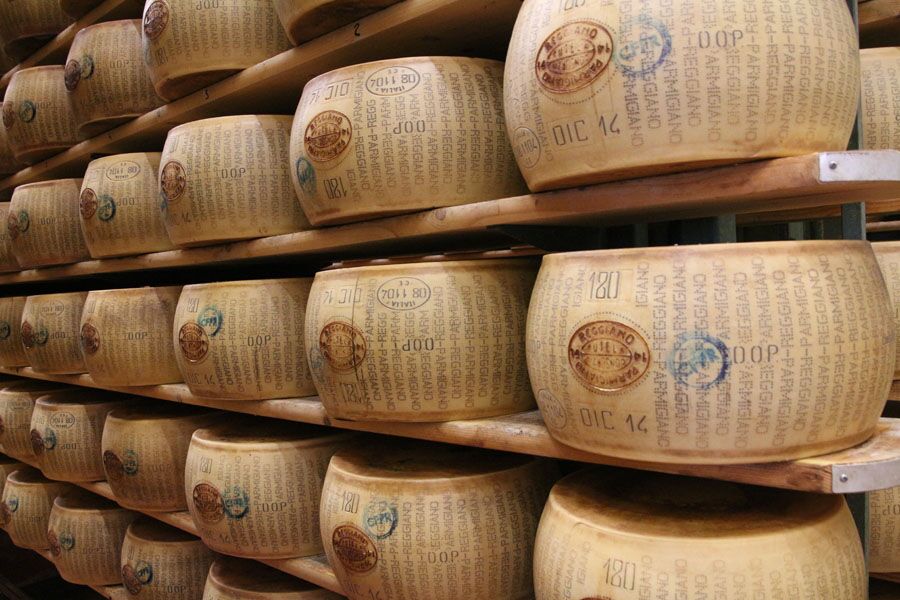 Opening a giant wheel of cheese is no easy feat. The cheese master and a helper placed a number of knives in order to crack it open precisely in the middle. And oh the wonderful scents that wafted out as soon as that cheese split open. It made it all worth getting up with the roosters to tour a Parmigiano-Reggiano factory. 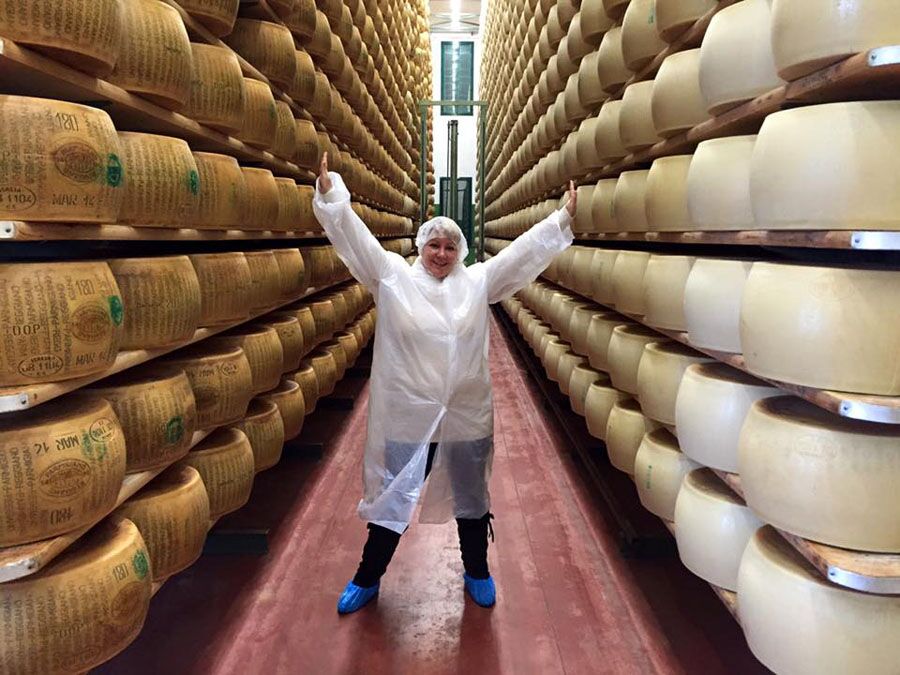